Please ensure Javascript is enabled for purposes of website accessibility

The next time your friends and family camp at Leisure Resort, meet up on our basketball court and shake things up a bit with these basketball game alternatives. We have sports equipment for rent onsite, so all you’ll need to bring is your game face! 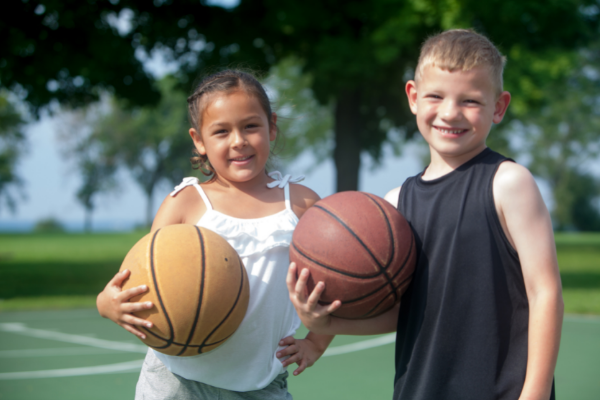 This basic game requires at least 4 players and 2 basketballs. First, divide your group into two teams and file behind the baseline. Each team will have a ball, and once the start time begins, one player from each team will race across the court to the opposite baseline and back, dribbling the ball. Once back at the starting baseline, the player hands the ball to the next player in their team. The first team to have all members finish the relay wins. For a more challenging game, set up cones and other obstacles along the course.

Play with as little as 2 players. Only one ball is needed. Set up five or more spots in a half-circle around the basket. Each player is allowed two shots to make a basket. If they make it within those two shots, they move onto the next position in the arch. If a player misses two in a row, the player’s turn ends, and they can try once every player has taken their turn.

Cool Down on the River

After working up a sweat on the basketball court, head on down to the river. Bring your tube or rent one of ours for a relaxing float down the San Marcos River. Plus, our shuttle service will bring you right back to the resort after your tubing ventures.

Spend Your Days at Leisure Resort on the Court or in the Water!